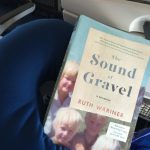 As parents, many of us are downright obsessed with encouraging our children to love reading. Over and over again, we are told of its importance, and the teachers send home endless reading logs and stand ready with the roll of stickers to reward the effort. The effort being all parents everywhere, remembering to make the kids fill it out, and then we sign it with a handy crayon in the carpool lane.

As an avid reader, I recently exploded with book thug happiness as part of a social media launch team (#the4500launches) for The Sound of Gravel by Ruth Wariner (shameless plug –> www.ruthwariner.com) which included not only my first Advance Reader Copy, but the book ranked as a New York Times Bestseller upon its release. So the drive to instill such passion in my kids came naturally in my maternal role. As a parent, I certainly had my shares of failures (potty training, teaching them to drive, self-initiated hygiene); however, having them slightly obsessed with books I chalk up to a win.  However, as I bask in the glow of this child rearing triumph, I recall there were some interesting conversations with the elementary school.

Few things strike fear in a parent more than seeing the number of the elementary school pop up on your cell phone in the middle of the day. I am uber organized enough that I have saved all the “incoming” phone number variations (um, yeah, there was considerable opportunity to do so). Even to the point I have them identified by caller ( for example, the vice principal’s office versus the nurse).

Poster Boy for The Strong-Willed Child

My youngest son has been on a first name basis with both throughout his school career. Let’s just say I wish I had a quarter for every time another parent recommended the book The Strong-Willed Child to me. He is definitely one to always push the envelope and test boundaries.  I’ve often joked that there should be a Little Golden Book entitled You’re the Reason Mommy Drinks.

But I digress, one day while I’m at work, the caller ID shows the vice principal from the elementary school, where my son is in first grade, is calling my phone. With a very short prayer (ok, prayer may be a loose term, I think I said “Oh my God”) I answered the call.

My dear boy had requested a hall pass to go to the bathroom. Please understand that our school are all “open concept” (which is latin for “total distraction opportunity and zero noise control”). This means the toilet-tarium is centrally located for each pod of eight classrooms. Please note that I think one can delineate a direct correlation with “open concept” schools and the trend in ADHD diagnoses, but I will save that rant for another day.

So after acquiring his pass, he beelines for the library. Now being interrogated by the Vice Principal for his bad choice, he explains that today was supposed to be library day.   However, they didn’t get to go because of a meeting being held in said library, so the teacher made all the children turn in their library books. My son was panicked, he had not finished his book. What if someone else checked it out before he got to it? So he faked the urgent need to urinate, believing he could casually pop into the library and re-check the unfinished work of literature.

I am pretty sure the teacher thought twice about letting him have a hall pass the rest of the year. On the bright side, the he became the librarian’s pet student for the rest of his time at the school.

This pet-status came in handy a few years later during the annual Scholastic Book Fair. I forgot to leave cash for him, as I promised (#parentingfail) before I left town the day before. He didn’t want to ask his dad because he thought he would say no. So my child shows up at school with my checkbook, and started writing checks for this purchases. He had “signed” the checks beforehand, so that it would appear I had endorsed (literally) this approach.

The librarian, bless her heart, was barely holding in her laughter when I answered that call. Luckily since he was eight, no forgery charges were to be filed. Good thing, can you imagine what they might do to a book thug in the clink?