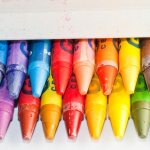 A friend of mine made a brilliant post on Facebook during the midst of one of the recently racially infused news headlines. He said:

“We must stop speaking of one another as though we are living in a box of crayons.”

Do you ever realized how often we label one another? I am guilty of this, and the person I like to stamp all over with adjectives is usually me. His description focuses on color – but think of how we label by size, religion, etc..

One day when they were elementary school age, I took my two boys to McDonalds for a happy meal. We didn’t eat a lot of fast food so this was an event for us. Let me explain something about my youngest – he takes his food very seriously. Now, as a 16-year-old, he could eat Paula Deen out of house and home. I do not think it is a coincidence that a new HEB was built one mile from my house – it was a strategic move on their part. And the child can talk. Yes it is genetic, though my husband would argue that it is a miracle anyone in my casa can ever get a word in when I am around. And the child loves McDonald’s so much, he requested to have his 4th birthday party there. And 5th and 6th. You get the picture.

So, as we are standing at the counter waiting for our food, he is jabbering a mile a minute talking about which toy he hopes he gets in the freaking happy meal, how much he loves french fries, he hopes they go easy on the salt, what he is going to do when he gets home. etc.  We are the only ones around, so this mother of the year must have been feeding her kids lunch at some random time.

The register was being handled by a woman probably in her late teens / early twenties. She looks at me and says “Did you know your son as ADD?” and then adds slowly in explanation “That means Attention Deficit Disorder”.

Now hear is the really shocking part – I was speechless. She obviously misjudges my expression, and continues, “You know you can take him to a doctor and get medication so he is not like this, Mom.” I have a rule, only humans who have made their earthly debut via my va-jay-jay can call me that, so I my inner redneck was somewhere north of ticked off and south of kicking off my flip flops and pulling her hair.

My response, “I find it amazing that someone like you is working here. I mean, with your student loans from medical school, I think it must hard to make ends meet ringing up Big Macs.”

I called my best friend on the way home, and I let her know that you can get a diagnosis with out a copay while you drink a milkshake in front of a clown (and I was not referring to Ronald). To say I want not “Lovin’ it!” would be to put it mildly. That idiot needed to put her crayons away and keep them the hell off of my kid. She is lucky Mama Bear wasn’t PMS’ing.