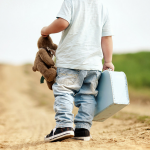 My husband and I both love to travel, and because we had our children young, most of our traveling adventures included the kids. My youngest son had visited seventeen states before he made it to Kindergarten. Along the way, literally, we noted a few key “Do’s and Don’ts”, so in the interest of public service, I wanted to share. I once asked my pediatrician if he thought it was ok that we took our kids all these places, and his answer was “well, you  know they HAVE kids there, right?” Don’t be afraid to get out of the traveling comfort zone with them in tow. One my friends describes vacation as “where I do everything I do at home, but with less convenience.” Last year she took her three kids, plus a spare to Costa Rica. The memories are worth the inconvenience. Bon Voyage.