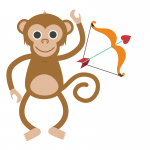 When my boys were school age, every year before Valentine’s Day we made the requisite trip to Target for cards to share with their classmates. In 2005, after carefully selecting “Finding Nemo” themed cards, my younger son, who was in kindergarten at the time, announces he would like to select a special card.

I smile, Sara** is the cute girl across the street that he has known since they were toddlers.

Encouraging independence, I instruct him to select a card as I watch from the end of the aisle (mistake #1). He is about three feet tall, so his selection is limited to the bottom half of the display.

My older son is visibly annoyed by the delay, and stands next to the cart, sighing and kicking the wheel.

My younger son has an affinity for the ladies. When he was three, he took gymnastics lessons. He would get mesmerized by the girls practicing all around the gym and need to be constantly redirected by the coach back to his activity. When he was four, he had a day care teacher who was a knockout – talk, red hair and an hour-glass figure. Smoothest drop-offs we ever experienced as he bolted into her arms. Once when he was two, we were in church and he was standing up on the pew between my husband and I. When the priest directed the congregation to “share a Sign of Peace” with each other, he spun around to the well-endowed parishioner behind us, and sunk his toddler face into her cleavage. Luckily, she was mother to five boys, so nothing could phase her, including getting motorboated during mass.

It is a monkey in a diaper.

He proudly returns with a card. It has a monkey on the front, dressed like cupid, modestly wearing a diaper and holding a bow and arrow. I hold it so my second grade son can also opine on the selection (mistake #2).

It says on the front “To My Valentine – How I love your smile..”

Inside: “…and you also have a nice butt.”

Although I am speechless, my older child points at his brother and yells, “You know you are not old enough for sex!”

In the middle of Target, in front of God and everyone.

(Note: My oldest son’s deficiency of an oratory filter is genetic trait.)

I am doubly horrified. My little boy wants to confess to five-year-old Sara what a fine rump roast she has, and my older son thinks his younger brother is a sex addict.

Neutralizing my expression, I do not respond to either child. Remember, I am in the Deep South, and at this point, I risk getting nasty side glances from the elderly ladies thumbing through the cards with Bible verses.

Waiting until we are safely sealed inside my SUV, I debrief with the children on the incident. I ask my youngest if he understood what the card said. He quotes the front and inside of the card to me, and simply explains that he thought it was funny. I ask the older child if he knows what sex is, and he rolls his eyes and says of course he does. When pressed for evidence of his knowledge he says, “Kissing of course. What did you think I meant?”

A decade has passed since this incident.  We still refer to any slightly risqué situation as “playing the monkey card”.

Thanks Target. Could you stock cards that mention bootylicious Valentines a little higher on your displays? That would be great.

**Name changed to protect the “baby got back” innocent child.